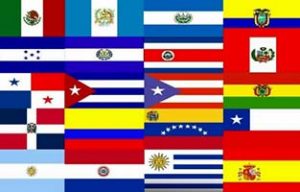 European Spanish, sometimes known as Castellano, and Latin American Spanish can be understood by Spanish speakers all over the world, however there are many differences between the two, both in phonology and vocabulary. When choosing foreign language voice artists, it is important to select talents who speak the right variation for your audience.

A very clear distinction between European and Latin American Spanish is the pronunciation of the letter C, when followed by an I or an E, and the letter Z when followed by a vowel. In Spain, the letter C is pronounced as /θ/, or the ‘th’ sound in English. However in Latin American this is pronounced as a ’S’ sound. One of the most popular urban myths which claims to give reason for this differentiation, is that there was once a Spanish king who spoke with lisp, which was then imitated by the Spanish population.

The way in which the second person plural is conjugated can be a good indiction of whether someone is speaking European or Latin American Spanish. Speakers of Latin American Spanish will always use ustedes no matter who they are speaking to. However speakers of European Spanish will use ustedes only when addressing a group of people who are perhaps older or more important than them. For everyone else, they will use vosotros. In a similar vein, it is common in Latin American to hear the word ‘you’ as vos, whereas in Spain this would be tú.

As well as this, in many places in Latin America you will notice the ’s’ sound sometimes goes missing or is ‘swallowed’. For example the word está can become eh’tá. This feature of speech is actually also common in the southern parts of Spain.

Communication between speakers of the two is usually always fluid and much like communication between the speakers of UK and US English who may use different vocabulary and have different accents, but have no trouble understanding each other. However in terms of voice-overs, translations, subtitles and localisation, it is important to identify which market you want to speak to and then use resources from this area. If you want to hear the differences yourself, take a look at our European and Latin American voice-over catalogue!

In part 1 we had a look at the RP, Yorkshire and Scouse accents. In this blog we will continue on and look at more of the accents found within the British Isles.

The most famous of the Midlands accents is the Brummie accent from Birmingham. The term derives from Brummagem or Bromwichham, which are historical variants of the name Birmingham. Whilst Brummie is not the only accent or dialect to be found in the Midlands, it is more well known than it’s neighbours in the Black Country or Coventry.

Some examples of Brummie words and phrases:

The outdoor – an exclusive West Midlands term for an off-licence

You can hear an example of a midlands accent here courtesy of James M.

The Geordie accent is found in the North East of England in the Tyneside area, predominantly in Newcastle-Upon-Tyne. The origins of the term are still up for debate, but in many respects Geordie is a direct continuation and development of the language spoken by the Anglo-Saxon settlers of this region. The Geordie accent has been voted the ‘sexiest accent in Britain’.

Some examples of Geordie words and phrases:

You can hear an example of the Geordie accent here courtesy of Laura E:

The Cockney accent originates from the East End of London and can be considered the broadest form of London local accent. Cockney is characterized by its own special vocabulary and usage, and traditionally by its own development of “rhyming slang.” Rhyming slang, is still part of the true Cockney culture even if it is sometimes used for effect.

We have a wide selection of accents and dialects available in the Voice Over section, so whatever you are looking for we can provide you with the most suitable option for your final product. Please view our sample page here: https://adelphistudio.com/voice-overs/.

There are many factors to be taken into account when choosing the correct voice for your product. One of these factors is what accent you want to use to sell your product/service.

There are a wide variety of accents and dialects that can be found here in the British Isles, and in this blog post we will be looking at a very small selection you may come across.

Received pronunciation (or RP for short) is probably the most widely studied and most frequently described variety of spoken English in the world, yet recent estimates suggest only 2% of the UK population speak it. RP is identified not so much with a particular region, but with a particular social group, although it has connections with the accent of Southern England. It is associated with educated speakers and formal speech, and is possibly the closest to a standard accent we have here.

Here is an RP sample from our website courtesy of Phillip:

Being based in Sheffield means we at Adelphi are most familiar with this dialect. With Yorkshire being the largest county in Britain, it is no surprise there are a number of different variations of accents found across the county. The most commonly thought of Yorkshire dialect is that of the heavily industrialized West Riding (West Yorkshire and South Yorkshire after 1974.) This is familiar to most, thanks to Radio and TV dramas set in Yorkshire. Recent studies have also shown that the Yorkshire accent is seen as one of the nations favourite accents, and is seen as ‘warm’ and ‘genuine’.

Here is a Yorkshire sample from our website from Marie:

The highly distinctive Scouse accent is found primarily in the county of Merseyside, and is very closely associated with the city of Liverpool and the surrounding areas. Up until the mid 19th century Liverpudlians spoke pretty much the same as their Lancastrian neighbours. The Scouse sound was created by the influx of people arriving through the docks from far and wide. The major influence comes from Irish and Welsh moving into the city.

Although this list is incredible short, and in no way complete, we hope we have shed some light on some of the different accents found in the UK. We have a wide selection of accents and dialects available in the Voice Over section, so whatever you are looking for we can provide you with the most suitable option for your final product. Please view our sample page here: https://adelphistudio.com/voice-overs/.

Adelphi can provide all of the services detailed above for your voice-over requirement. Please visit our website at www.adelphitranslations.com and click “Request a Quote” or feel free to call us on (0)114 272 3772.

Welcome to the first post of Adelphi’s new blog We hope you’ll join us each week as we share with our readers industry news, how-tos and basically anything which sparks our interest in the world of languages. Whether you are a current client, a future client or one of our linguists, we want to connect with you and show you what makes Adelphi tick.

Chinese characters in the Japanese language

Since three of our staff speak Japanese—one as a native—I thought our first offering should take us to Japan, a nation whose language has been influenced during the last 1,200 years by its proximity to China. Japanese makes use of three different writing systems (very often in the same sentence) and one of them, called kanji, arrived in Japan from China in the closing centuries of the 1st millennium AD. Whereas in English we make use of 26 letters to form all of our words, Chinese has an individual character for basic concepts, with the more advanced ideas being compounds of two or more characters. In Japan, Chinese characters form an integral part of the script and most adult Japanese will know around 2,000 or more of them.

The other two writing systems of Japanese, called Hiragana and Katakana behave differently and were developed within Japan at different times. We will discuss these in future posts.

Each year, the Japanese Kanji Proficiency Society holds a national ballot in Japan to determine the character that represents the past year. The winning entry becomes Kotoshi no Kanji (“Kanji of the Year”) and is announced on 12th December in the city of Kyoto. The choices tend to represent the national mood in Japan and highlight important events of that year. For instance in 1995—the first year to have a Kotoshi no Kanji—the character was 震 shin, meaning “quake”, chosen for the Kobe Earthquake that had happened in January of the year.

The latest Kotoshi no Kanji was announced in December last year and this time it was 税 zei, meaning “tax”, reflecting discussion in Japan about the increase in sales tax in Japan from 5% to 8%, and the planned hike in October of this year up to 10%.

It is still too early to guess what this year’s character will be, but we hope 2015 will prove to be a successful year for all of our clients and linguists.