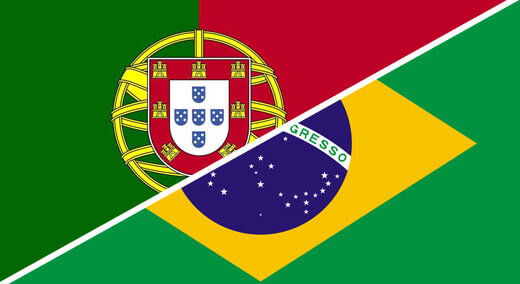 To the untrained ear Brazilian Portuguese and European Portuguese can sound like two different languages due to many differences in pronunciation and phonology, as well as vocabulary, spelling and grammar. Here is a brief summary of some of the differences..

The Portuguese spoken in Portugal is often referred to as more ‘closed’ due to the tendency to pronounce vowel sounds with a more closed mouth, whilst Brazilian Portuguese speakers will produce more open vowel sounds, which many would say makes it easier to understand and perhaps more exaggerated. The pronunciation of the ‘de’ sound, for example in the word universidade can be quite a good indicator of either European or Brazilian Portuguese. In Portugal you will hear a more harsh sound, similar to a short and sharp ‘duh’, whilst in Brazil you would hear a softer ‘dgee’ sound. This indication can also be heard in words which end in a K, or a P. For example if a Brazilian was on their way to a workshop de hip hop, you would hear workee shoppee dgee hippee hoppee. As well as this, in Portugal the sound of an S at the end of a word will sound more like SH. For example the word for the number two will be pronounced more like doySH, rather than doySS as in Brazil.

The vocabulary of Brazil and Portugal can also differ. For example, the word rapariga is very often used in Portugal to say girl, whilst in Brazil they use the word menina. In fact in Brazil, rapariga means something else entirely – so be careful! In Brazil you would go to the banheiro, whilst in Portugal you would need to go to the casa de banho (bathroom). In Brazil, you will always hear você (you) in both formal and familiar situations, whilst in Portugal you will hear the word tu used between friends, family and in casual situations.