“I have been an actor and voice actor over 20 years in New York and enjoying to work with Adelphi for these couple of years. I love voice works because I can express the world by just my voice and audience can imagine it infinitely.” 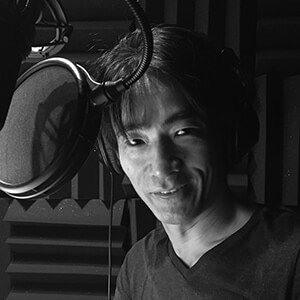 Since arriving in New York from Nara, Japan in 1990, Yoshi has been entertaining audiences as an actor, MC, and samurai martial artist.

As a samurai artist, he was cast for the main role of the TV series, “Samurai Sportsman” (OLN, 2003) and invited as a guest for “The late night with Conan O’Brien” (NBC, 2004), Monday Night Football Promo.

On the other hand, he has been hosting a lot of events and game shows on TV in the US and Europe such as “Big In Japan” for Greece, Sweden, Denmark and Portugal in 2008-2009, and “Japanizi Going Going Gong” (Disney XD) in 2013. He also has been emceeing the Brooklyn Botanic Garden Sakura Matsuri as well as Washington DC.

1, First choose your language
2, Filter the level of professional experience, dialect. and gender.
4, Click the + to add voices to favorites and these will automatically be included in your quote request.
5, Fill out the rest of the form and we will get back to you with a quote.

Select a language from the drop-down menu

Adelphi Studio is a multilingual voice over services agency producing foreign language voice-overs in over 75 languages with over 1,200 voice artists.