Unlucky Numbers Around the World

For localisation professionals there are many things that have to be considered when changing content. 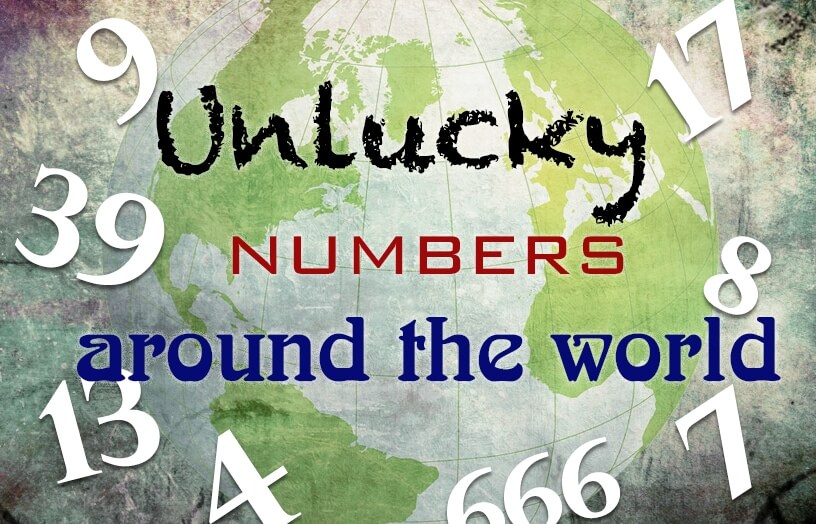 Often, translations take up the majority of the time and effort but you are not finished there. One thing that can often be overlooked but can have a big impact on the content in certain countries is numbers. Many cultures consider at least 1 number to be unlucky and some take it much more seriously than others.

#4      First of all the number 4 in China, Japan and some other East Asian countries is seen as extremely unlucky, it is pronounced ‘shi’. The number is considered so unlucky by some that it is left out in things such as seat numbers, floors and sports teams. The reason for this is down to the pronunciation, in Mandarin and Japanese the word for death is very similar in pronunciation to the number 4. This superstition is known as tetraphobia.

#7      Although in the west 7 is considered lucky in many countries, in the east particularly China, Thailand and Vietnam it is considered unlucky. The reason for this is that the 7th month is the ghost month! The month where hell is open and ghosts can rise to visit earth.

#8      The number 8 is considered lucky in the far east, however in India it is considered unlucky. It is said to be related to the three stars of Saturn or ‘Sani’ in Hindi. It is said to be a relationship breaker and peace breaker and many catastrophes have happened on the 8th or on dates related to the number 8 such as earthquakes, tsunamis and terror attacks, these have all enhanced this theory.

#9      Another unlucky number in Japan is the number 9, pronounced ‘Ku’. The reason for this is very similar to the number 4 except instead of sounding similar to death it sounds similar to torture or suffering.

#13    Probably the most common unlucky number across different countries particularly in the west. There are a few theories for this, most relating to religion. Firstly, the last supper has 13 people and it is said that Judas the betrayer of Jesus was the 13th to sit at the table. Furthermore, on Friday 13th October 1307 King Philip of France arrested and tortured the majority of the Knights Templar, this is where Friday the 13th got its bad rep from. Another theory is linked to full moons, monks responsible for calendars had problems with years with 13 full moons instead of 12.

#17    In Italy the number 17 is seen by some as unlucky. The reason for this is that the Roman numerals for 17 are XVII and when these are rearranged they spell VIXI which means ‘my life is over’ when translated from Latin.

#39   In Afghanistan this number translates to ‘morda gow’ which means ‘dead cow’. This is a well-known slang term for a pimp and as a result is highly undesirable in Afghanistan, so much so that number plates with 39 in them are almost impossible to sell or are often covered up.

#666 Another commonly known number amongst Christian countries because it is the number of the beast (the devil). This is referenced in the bible by John and is therefore considered unlucky amongst Christians.  However, recently scholars believe that the number was mistranslated in the King James bible and is actually 616, but the debate remains open on that.